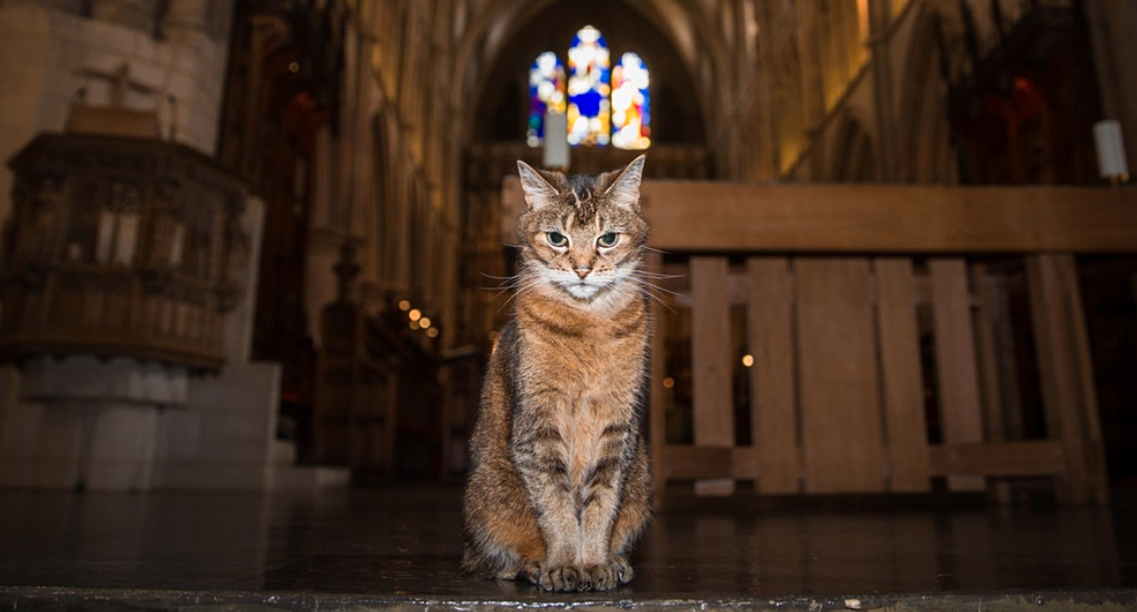 This is an honouring for Doorkins Magnificat a street cat surviving on hard times, but one day she showed up at Southwark Cathedral where the vergers offered her food and a kind stroke. It wasn’t long before Doorkins Magnificient was showing up every day and the rest is history.

During her 12 years as resident cathedral cat, Doorkins Magnificat made herself at home, favouring the spot next to the warm pipe beneath the chancel stone seats, on a cushion in the consistory court, and stretched across a grate wafting warm air into the cathedral’s cast interior. Then every Christmas she’d make her bed in the straw of the nativity scene.

The Queen Pays A Visit

In true Doorkins Magnificat style, when the Queen visited she opened her eyes a slit, assessed, closed them again, returning to sleep.

Doorkins Magnificat grew her wings on 30 September after a stroke and died in the arms of the head verger at his home. They believe the 2017 London Bridge terror attack took its toll on her health. The cathedral was closed and cordoned off for several days, and Doorkins Magnificat had no way to get back inside, let alone feel safe away from the emergency vehicles and armed police.

‘When we eventually got her back into the cathedral, she ran in and wouldn’t go out again,” said the dean. Soon after her health began to fail, with kidney problems, loss of hearing and eventually blindness.

For the first time in the cathedrals history, her life was celebrated and honoured with a thanksgiving service under the cathedral’s Gothic arches for 30 attendees (in line with Covid-19 regulations) and streamed live to the rest of her admirers. Her body was laid to rest in the churchyard.

The cathedral dean said, “In more normal times, we often host memorial services for the great and the good. But I don’t think there’s ever been a service for a cat.”

The dean said, ‘She arrived, she entered and we made her welcome. People concluded that if this little cat is welcome, maybe I am too.’

Rest peacefully dear one, and thank you for raising consciousness and being the magnificat that you are.