Introducing my beloved animal friends who have been by my side every step of my animal communication journey.

Morgan and his Legacy

Morgan entered my life in 2004 when I adopted him from the Mayhew Animal Home in north London. Within a couple of months he had introduced me to a subject I’d not heard of – animal communication.

He then went on to guide me along my own journey as an animal communicator and helped me make decisions that would shape my professional animal communication service, Animal Thoughts, until his passing in July 2011.

To say this small and humble dog changed my life really doesn’t do the positive impact he has had justice. I left a successful 15-year career as a sought after Company Stage Manager and moved into animal communication because of Morgan; a move I have never regretted. I awakened my intuitive ability to communicate with animals telepathically because of Morgan; and have helped thousands of people and animals. I have tracked lost animals and saved lives because of Morgan and I have been able to comfort those grieving for their own animals, all because of this dear dog.

Morgan helped and encouraged me to write Heart to Heart which in turn has awakened others to the reality that animals are sentient beings just like us and able to communicate their feelings if only we take the time to listen.

Morgan has made the biggest contribution to my life and in return his physical absence is huge. I can speak of him. I am lucky; I can even speak to him. And thankfully, he connects with me and continues our relationship from his new non-physical existence. I never thought I would have said that back in 2004 when I was both skeptical and an atheist.

Morgan walked into my life, challenged my beliefs and opened my eyes and heart in a way I never thought possible. The thing that has changed me the most knowing Morgan is his complete generosity of heart to others. He sees the good in everyone.

If I ever needed advice I would go to Morgan; I could trust his opinion and guidance and I will continue to do so.

Before his passing Morgan asked me to start writing about my experience as he neared the end of his life as well as his side of the experience. What started out in a very small way progressed and after his transition he gave me the chapter by chapter breakdown of a new book which was published by Hay House UK as The Animal Communicator’s Guide Through Life, Loss and Love. It soon became an Amazon No.1 Best Seller and has been translated in to French and German.

His legacy is greater than I could ever have imagined.

Thank you Morgan for coming into my life. I am so grateful to you. I love you.
Pea

On this day there was a balsamic moon. The balsamic moon represents the end of a cycle before a new one begins. It is a period when the veil between the conscious and the unconscious is thin. A very good time to end one journey and begin a new one.

My life could not be complete without a feline. I have grown up with cats and I feel in-tune with how they move and look. I admire their independent characters, loyalty and demanding nature.

Texas is master feline and heart healer extraordinaire in my life. Or as he describes himself and all ginger cats, “We are the master species. Honour our beautiful presence in your lives.” Like many cats, he has a healthy self-esteem.

We met when aged 6-months he ran out of his cage at Battersea Dogs and Cats Home and pushed his body into my legs. Texas is a slim cat with golden fur and a Lion King quality. He is also super charming and manages to win over even the most vociferous non-cat person.

In a very still, silent and peaceful moment, the love of my life ‘grew into Spirit’.

Texas chose the timing of his transition and his process was honoured and supported 24/7 by myself, Jo and Grace who adored every inch of him.

He has been a constant source of delight, extraordinary heart healing and co-wrote ‘Animal Communication Made Easy’. He’s also been cheeky and an incredible ‘Master Dog Trainer’, especially with Grace who just adored him and is grieving for her friend just like us. He could diffuse psychic attack in an instant and healed many imbalances with his pure loving presence. Really there is nothing that Texas couldn’t do. Including orchestrating the use of neighbours houses as his convenient cut-through so he didn’t have to go all the way round the block. He even lingered and slept on their bed sometimes…they all loved his visitations.

We are missing his meowing demands and chatter (he really could talk!), his deep, loud purrs, sweet and gentle nature, his greeting us at the front door and also ‘putting’ us to bed, his sunbathing and lording it over ‘his garden’, and waking us up with the light because a new day had begun and we all needed to go outside to enjoy it. Texas has been and is a huge emotional power, quite lion-hearted within his smaller feline frame, and I personally feel so blessed to have been  on the receiving end of his love and profound teachings.

Texas had many friends, he even won over the self proclaimed ‘non-cat’ visitors (who have also cried tears!) and was very sociable with everyone…never keeping his love exclusively for us but sharing it generously with those who crossed his path or who came to stay here to look after him during our trips away. When I held book launch parties here he just lay on the lawn (his lawn) all day and waited for people to come and spend time adoring him. He took part in many a Skype call with clients and during online mentoring and also in live Facebook interviews, where he’d often take up the whole camera view! I loved him for so many other reasons I could talk and talk about him forever.

Texas was a huge physical presence in our lives and helped us through some very tough times…to us, he was *the best cat ever* and we feel honoured and grateful to have been able to share so many years with such a huge loving Light!

Texas left about age 19 years. He loved us gigantically for 18 and a half years and we did the same.

You are so loved Texas, and I know you already know that.

I remember when Bodhi first arrived (re-homed from Chilterns Dog rescue after being there over 6 months having been adopted then returned within 4 days), he jumped onto the sofa “home at last” and at night he howled the street down which explained one of the reasons he’d been returned so quickly. The other reason was that he was always meant to be with my partner Jo and I. Before my previous dog, Morgan, passed over he told me, “We are sending someone to you” and in the image I could see a black dog. Once my heart was more healed and open the signs came faster and faster. Bodhi was The Black Dog described in The Animal Communicator’s Guide Through Life, Loss and Love.

Within the first few weeks Bodhi managed crafty midnight raids of the fridge, each time removing precisely 8 items and carrying them into the living room for a tasting session. The ones that he approved were torn apart and devoured; the others discarded with puncture holes.

Never ones to give up on an animal we were in for the long haul and with love, walks and patience Bodhi began to recover from feeling traumatised and poorly in rescue and his confusing and unsettling life before that.

Bodhi was always a shy and private dog with a few complexities that we accepted as part of his whole self. Generally a gentleman, occasionally an oaf (said kindly), he could be clumsy with little spacial awareness but also extremely loving and gentle.

Bodhi was a hugger. Although he appeared aloof to those who didn’t understand his true nature he loved physical closeness and nothing better than being a lap dog on Jo’s lap the moment she returned from a trip away.

Bodhi became my office companion and we took long walks together. He was great at helping me unwind. He taught at only a handful of workshops because he wasn’t keen on being the centre of attention but he would help me out if asked because he was devoted like that. He was happiest when at home or exploring his favourite walking place. Bodhi even shared his bed with Texas but preferred to have it all to himself.

A few of the other things I will remember about Bodhi is how he got us barred from a pub because of his loud barking which he expressed to great effect once he got bored and decided he wanted to leave. He’d also lie down the side of the bed for hours on end when one of us was feeling poorly. There was one time when he warned me of danger in the house in the middle of the night by standing guard at the top of the stairs and growling loudly at some invisible energy down in the hall. Bodhi always had my back in that way. He really was my shadow and a mirror to some of my own feelings.

At the end of his life he was so courageous and determined that I am still in awe of his strength. We have reconnected since he left his physical form and he was delighted, as was I.

Grace arrived into her forever home on 19 August 2017 but I could feel her in my heart before then.

Grace settled within 10 minutes of entering the front door and swiftly made the sofa her snuggle spot. Rescued from a Romanian dog ‘shelter ‘and fostered within the UK, she’d already been through quite a lot before she got here. However, she’s doing amazingly well as most of the dogs do once shown some love and stability.

Beautiful inside and out, I’m really looking forward to our unfolding journey together.

Frankie was born the same date that Texas transitioned, exactly two years later. She came into my life from an unexpected source and was always meant to be here. She wasn’t what I was looking for, if I was looking at all. I will share more about Frankie with you soon! 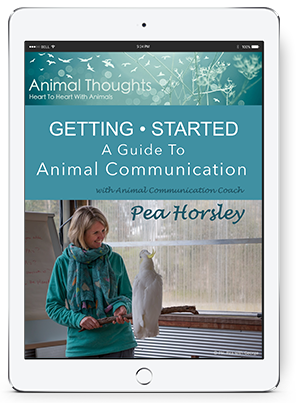 A Guide to Animal Communication – Free!

Subscribe to our newsletter to learn about upcoming events and get instant access to your complimentary guide to help you start your animal communication journey right now!