For The Love Of Cats 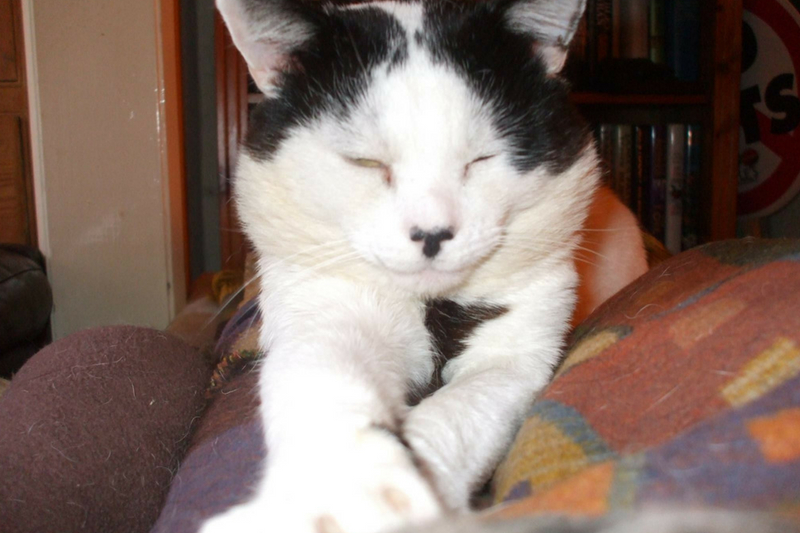 I wanted to put a spotlight on a local cat rescue charity who I am supporting through my London Animal Communication Workshop on Saturday 29 September 2018. I chose this charity because part of the team who established it is one of my animal communication students, Claire, who I know is very dedicated to the wellbeing and welfare of our feline friends.

MK Cat Rescue was established in April 2015 by Carole, Annie, Stewart and Claire. All had volunteered in cat welfare for other cat charities but wanted to set up a local cat charity, one where cats always came first, and would be community based.

Having decided to set the charity up, they took the decision to clear out their homes of unwanted bric a brac and headed to car boots at 6am on a Sunday morning to raise enough funds to bring in their first foster cat.

In May, Marley was admitted into foster, it was reported that his owner had died and he was left on the streets, being bullied by other more dominant cats in the area and with reports of stones and water being thrown at him.

Having settled into foster with Annie, Marley would swipe her – causing injury when wanting food or whilst being fussed.

Annie understood that Marley was struggling to adapt and took the time to get to know him and saw that beyond his feelings of confusion and loss that he had a funny and kind side to him, a side that Annie fell in love with.

Marley was adopted by Annie (perhaps that was his plan all along ?) and became part of her family. To this day he sits on her cat pen or stands guard at her foster room, protecting and reassuring those cats that come into foster.

Since Marley’s admission and 3 years on, MK Cat Rescue has re-homed 300 cats and has 40 volunteers, all working towards a common goal of helping cats in need. The ethics of the charity is to ensure that every person is given the opportunity to grow and continue their life’s purpose whilst being a facilitator in helping cats in need.

The charity has pushed boundaries on social media locally by revealing the cats in care, both providing details of the background prior to admission but also highlighting the cats journey whilst in foster up to the point of finding a new home.

In 2017, our volunteers attended just under 100 fundraising events at weekends to raise the much-needed funds to pay our veterinary costs. We keep administrative costs to a minimum ensuring as much of the funds go towards helping the cats as possible.

In 2018, the charity was a finalist for an award for Inspirational Charity. Voted by the public, we believe such a nomination supports our role as ambassadors to raise the plight of cats and their welfare. And to educate others on the importance of learning and listening, to understand the individual needs of each cat.

The charity is very much built on love, love of cats and animal welfare on a wider scale.

The MK Cat Rescue website provides details of some of the cats we have helped, but here are just a few of the wonderful cats that have come into our care and who have assisted the charity in highlighting the true plight of cats in need.

Our beautiful tortie Elsa came into care pregnant and following an emergency c-section developed septicaemia. Elsa was extremely ill for several weeks but was nursed back to health by Carole, whilst her kittens were hand-reared. By highlighting Elsa’s journey in our care, we received an amazing influx of wonderful donations of unwanted gifts, monetary donations and cat food.

Polly and Wally were found in a car engine at 6 weeks of age. Polly had a rather nasty wound on her nose and Wally was less than impressed with being brought into foster. After a few days it became clear that they didn’t really mind being given love and after a few weeks, well they simply glowed.

Beverley was admitted in early 2018 having been found as a stray living in someone’s back garden, she required surgery very quickly on admission for ear cancer and her transformation over a few weeks astonished all of us.  Her personality shone through and she was re-homed within a month of coming into foster.

At MK Cat Rescue we are blessed to be a team that is committed to helping cats in the community, no matter the colour of their fur, age or temperament. We work with every cat to ensure that they receive the right home environment that they request, and every cat is given love and respect whilst in our care.

We would like to thank Pea for her support and very much look forward to meeting those that are attending the Animal Communication Workshop on 29 September 2018.

For info and to reserve a place on my workshop, click here London Animal Communication Workshop.

For every ticket sale I’ll be donating to the rescue. I also invite you to say hi to MKCR who will be attending and available for chats, questions and donations of any pennies or pounds you can give to help save cats in need.

Communicating With Animals From Their Photo