CECIL – A Catalyst for Awakening 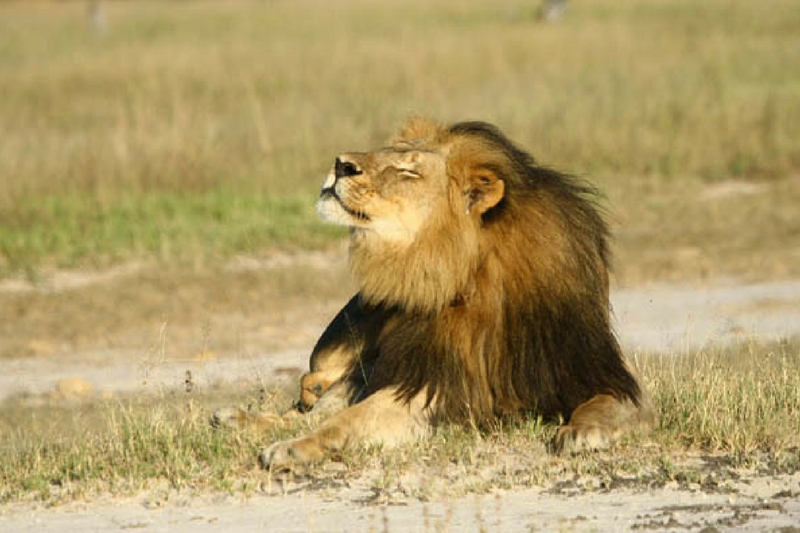 The truth is it was a hard time for animal lovers and there was an outpouring of heartbreak from people all over the world. We joined united in our condemnation for Walter Palmer’s killing of Cecil the lion in Hwange National Park in Zimbabwe.

I became numb. I felt overwhelmed by the surge of thousands of people reacting to Cecil’s death. Many expressed emotions of anger, hatred, shame, revenge, sadness, regret and frustration. The experience wiped me out but I also felt glad that so many were showing that they cared. It would be all too easy to jump on the coat tails of this public tragedy with more drama and stoking the fire of revenge frenzy. But the animals have taught me that this never works: their mantra is you cannot solve violence with violence, only love.

Cecil was a protected animal and part of the Oxford University Wildlife Conservation Research Unit (WildCRU) who had been tracking him via his GPS collar for research since 2008. Until now I have not been able to write to you about Cecil’s death because I needed time to experience my own storm of feelings before responding to the crisis of one lion dying at the hands of a man who called his action ‘sport’.

More than ever I wanted to be calm and neutral so that I could receive guidance from the one who truly matters, Cecil himself.

Would we have cared so much about Cecil if he were name-less?

Before I share my communication with Cecil I wanted to briefly discuss how we view the value of animals. I question whether there would have been such media madness if the lion we now know as Cecil had not had a name? Would we have cared then? Perhaps not so much? And why is that? And what does it say about us as humans? Do we need to see other animals more like ourselves in order for them to warrant our attention?

Born Free founder, Virginia McKenna warns of the decline, “If it continues at this rate of course within 10 – 15 years there will be none, except in captivity, which is absolutely something we can’t allow.”

When in-body he was a lion with a black-fringed mane and had become the best-known lion in Hwange National Park due to his distinctive looks and friendliness towards humans, often coming close to their vehicles.

As a professional animal communicator I have a responsibility to Cecil to speak his truth. That is what this role is all about: being the bridge between humans and non-human animals. From a place of neutrality, stepping aside from all of my own feelings and beliefs, my focus is to honour the animal I am communicating with and to listen and understand their perspective.

Cecil first expressed, “All is for the greater good. Let it be, let it rest now. There is a turning tide. I am free. Now and for always.”

When I asked Cecil what for his reaction to all the outpouring of grief he replied, “Listen to your hearts and why they grieve.”

He then pictured a heart with bright light shining out from it along with “Hearts are opening, expanding. More light will shine out, it is the start.”

He expressed that he did feel pain. His death was not easy – there was suffering.

He is not happy at the manner of his death, communicating it was not a noble death. He indicated that a noble death would be death from another lion.

When I ask Cecil what he wanted he responded he wanted us to look at the truth inside ourselves. He wants us to “Know Your Self.“

I feel Cecil is aware his death has become a trigger for raising consciousness and that is what he is encouraging when he prompts us to “Know Your Self.”

“Sit within your heart and you will know who you are,” Cecil replied.

In-spirit, Cecil is calm, peaceful and grateful. He expresses gratitude for all the outpouring of love from expected and unexpected place. This, he explains, is the purpose of life = LOVE.

He worries for his species, he expresses his concerns are valid, but the love still remains in and through everything he expresses.

Reactions some humans have expressed like hatred, anger or revenge are not part of who he is. He is love. He expresses love.

Cecil has a great purpose on this planet Earth.

Not all animals are here for a purpose other than to be themselves. It would be misguided and ignorant to say all animals are teachers for humans and here for us alone. While I do not condone the thoughtless murder of a sentient being, I can feel that there is something deeper and more meaningful to Cecil’s death.

Cecil is a great teacher.

His existence makes us question who we are, what we think and what we feel.

I believe in signs, synchronicity and universal intelligence (something greater than ourselves) running through all our lives. Human and non-human animals all have individual soul journeys. We are here to learn and ultimately, I feel we are here to love. That is what I have learned from animals.

When I ask Cecil again how as humans we can best honour him he replied, “Know the Truth of who you are.”

And so it is time to Re-Member…

The Awakening Has Started

ANIMAL COMMUNICATION is gaining a stronger footing is society and each year I witness a greater thirst from people to reconnect with the rest of the animal kingdom…our brothers and sisters…our co-inhabitants. At this time we are going through a great transformation and animals and animal communication are playing a huge part. The animals tell us love is the greatest power in the Universe and love creates love. Through this work of listening with our hearts, we gain greater understanding and opening and the ripple effect reaches much further and deeper than we can ever imagine. Please be part of that ripple effect and speak your Truth.

The One About A Chicken & A Pigeon