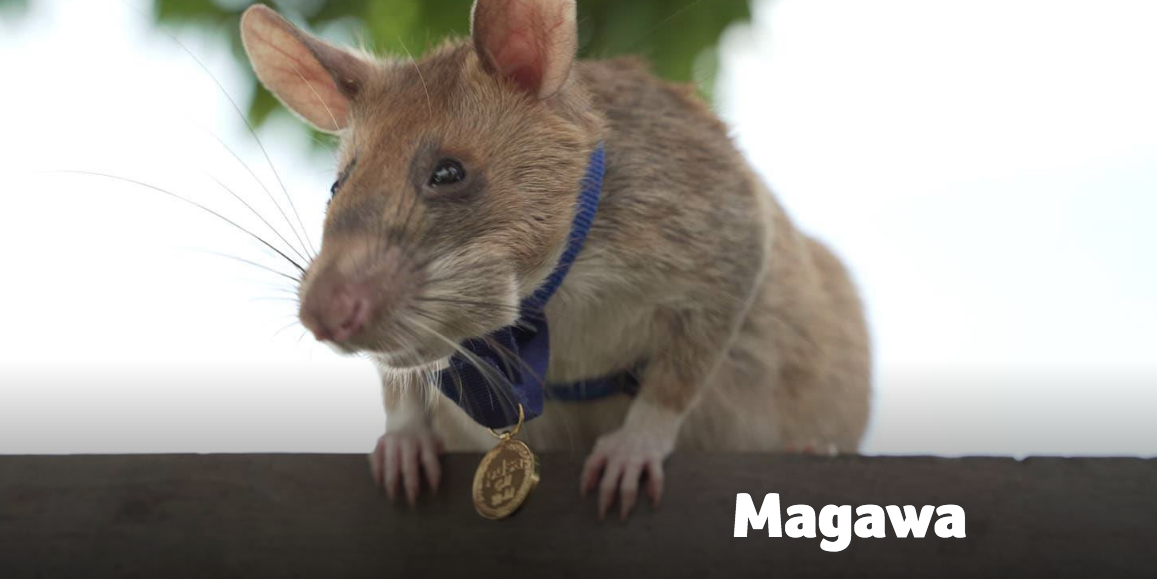 Magawa is the first rat in the PDSA charity’s 77-year history of honouring animals to receive the Gold Medal for life-saving bravery – joining a line-up of brave dogs, horses, pigeons and a cat.

Magawa, who is a giant African pouched rat, was formally presented with his rat-sized Gold Medal – the animal equivalent of the George Cross – because of his exceptional ability to detect landmines in Cambodia.

Over the past four years, Magawa has cleared more than 141,000 square metres of land (the equivalent of twenty football pitches), allowing local communities to live, work and play without fear of losing life or limb.

‘More than 100km2 of the country is contaminated with landmines and explosive remnants of war, creating more than 25,000 amputees, the highest ratio of mine amputees anywhere in the world.’ – APOPO

In his duty in Cambodia Magawa, has been able to discover 39 landmines and 28 items of unexploded ordnance. For each landmine Magawa finds, he saves a life; so far he’s saved 39 lives!

APOPO state, ‘Magawa is a bundle of energy and an elite mine detection rat. A real character with a steely determination, Magawa sniffs out explosives 96x times faster than conventional solutions.’

He was born on 5 November 2014 in Tanzania where he was trained by APOPO before transfer to Cambodia and his favourite food is banana and peanuts. Magawa is now nearing his retirement.

The African giant pouched rats are used instead of a metal detectorist because they have a highly developed sense of smell and are lightweight.

They sniff the chemical compounds of TNT (explosive) found in landmines and ignore scrap metal, which enables them to work much faster than a metal detector. They are also trained to detect tuberculosis.

APOPO trains the rats for a year and they work for about half an hour a day, usually early in the morning. Once the rats find a landmine, they tell their human handlers by scratching the top.

The PDSA Gold Medal is awarded to civilian animals for life-saving bravery and exceptional devotion to duty. The Medal is now recognised worldwide as the animals’ George Cross. Magawa is the 30th recipient of the PDSA Gold Medal, and the first non-canine to receive it.

The PDSA’s awards manager, Amy Dickin said, “Magawa’s dedication, skill and bravery are an extraordinary example of this and deserve the highest possible recognition.”